Become a Ford Center Insider
FORD CENTER TICKET OFFICE HOURS    For the health and safety of the public and staff, the Ford Center & Victory Theatre Ticket Office is open for limited hours on Monday, Wednesday and Friday from Noon - 5 pm 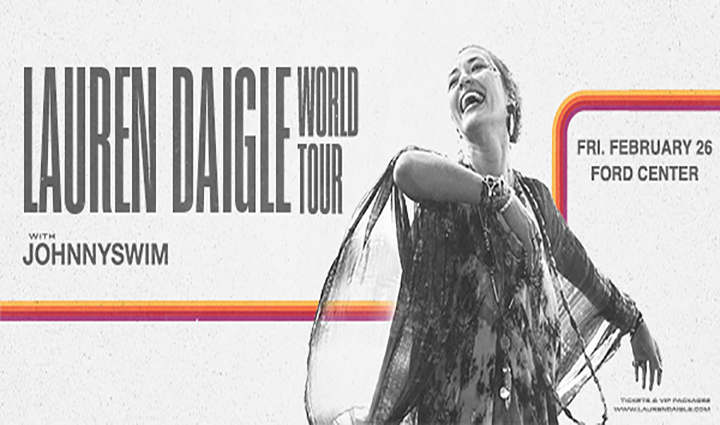 Two-time GRAMMY Award winner Lauren Daigle, who has sold out every one of her shows to date, will open 2020 with her first headlining arena tour, the “Lauren Daigle World Tour.”  It follows nearly 70 sold out performances that have taken place since the release of her GRAMMY Award winning album, Look Up Child.

With a voice that is both smoky and sweet, Daigle has forged a unique sound that is reminiscent of the soulful, heart-in-throat vulnerability of Adele mixed with the raw power of Amy Winehouse. Her ability to connect with her audience has captured critical acclaim and recognition as the fastest-selling new artist for her genre of the last decade.  Daigle’s Grammy Award winning and Double-Platinum certified single, “You Say,” has appeared in the Top 30 of Billboard’s Hot 100 chart and Grammy Award winning, Look Up Child, debuted at No. 3 on the Billboard 200 Albums chart and is approaching Platinum certification.  Her debut album, How Can It Be, has been certified platinum by the RIAA and has produced three certified Gold singles.

“This year has been life changing,” said Daigle.  “There’s no better feeling than to be able to look out from the stage and see how people have connected with the songs on this album.  Our shows feel like one big party of togetherness, and I can’t wait to create a whole new tour for 2020.  It’s going to be so much fun!”

The “Lauren Daigle World Tour” features an all new stage production, design and set list that will be highlighted by Daigle’s raw vocal power and stage presence. She’ll feature some of her hits, including her latest single “Rescue” and the double-Platinum selling #1 single “You Say,” as well as tracks from her previous platinum-selling album, How Can It Be.  Folk/soul duo JOHNNYSWIM will join Daigle.